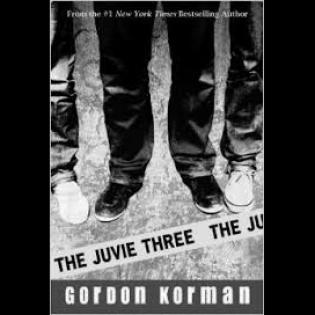 This literature guide was created as part of an 11th grade project at Castle Park High School in Indiana. The students chose the book to read, produced a video book talk (link below) and wrote the following questions and project ideas to stimulate thought and action about real issues.

Book Talk for The Juvie Three

1.) Have you ever been in a situation in which you were judged for a mistake you did in the past? Have you ever judged someone else by one mistake?

2.) Have you ever been at a point in which you have to take full responsibility for tough situations without any guidance or help?

3.) Have you ever been looked down upon and have to prove your worth?

4.) Has someone ever given you a second chance even though you were at an all-time low?

1.) Do you think the three want Healy to come home so they won’t get in trouble or because they actually care about his well-being? Explain.

2.) How do you think the penitentiary system affected the boys, personality wise?

3.) Arjay, even though being convicted of murder, is a good kid. Do you think that Terence and Gecko will change his morals and how he sees things?

4.) Do you think Terence's comment about them helping Healy at the hospital and getting arrested changed how the three will think and act throughout the rest of the book? Explain.

5.) How do you think the group feels about being looked at like criminals/convicts at school? Have you ever felt like you were defined and judged on one bad decision?

6.) Why do you think the three boys stayed in New York even though they were considered fugitives? What would you have done in their situation?

7.) Do you think Gecko's relationship with Roxanne helped Gecko pull through the tough times he and the others were going through? Explain using        evidence from the text.

8.) Do you think the nurses or Roxanne caught on to why Gecko was really at the hospital? What suggests this?

9.) Why do you think Deputy Chief Delancy gave Gecko a chance to break up with Roxanne?

10.) What significance did Gecko and Terence's encounter with the jocks have?

11.) Why do you think Roxanne ultimately decided to help the three even though she and Gecko were broken up?

12.)  Why do you think Ms. Vaughn is so Keene about the littlest things when she inspects the house?

13.) Why do you think Terence wanted to be with DeAndre and his “crew” so bad?

14.) What significance did Arjay not throwing away Casey Wagner's number have?

15.) If Healy would’ve stayed in the mental hospital, what do you think would happen to him? Would he be able to recover from his amnesia?

1.) In the best-selling book, The Bourne Identity, a CIA agent wakes up from a     coma with major amnesia and cannot remember who he is. This is similar to    Healy waking up from his coma with memory loss.

2.) The Shawshank Redemtion is a movie that relates to the life behind bars in the   sense of Arjay being convicted of murder, even though it was an accident and the victim brought it upon himself.

3.) In the book, Roxanne’s father doesn’t want Roxanne and Gecko to be   together because of Gecko’s legal situation. Sometimes people interfere with relationships and prevent them from happening, which is showed in this?

4.) Tupac Shakur’s “Trapped” as this song describes prison life that the boys went through.

1.) After the story, in your opinion, do you think that the three boys will learn from their mistakes and become productive members of society? Why or why not?

2.) What symbolism did Healy's broken bowling trophy have throughout the book?

3.) "At least we're here... prevent a lightning strike." In this quote it's obvious that Gecko is doing better. Do you think he and Roxanne will prevail even with her father's interference?

4.) After reading this book, do you believe that more opportunities should be given to convicts to shorten their sentences? (Rehab, community service, etc.).