Grade Level:
8, 9, 10, 11, 12
Keywords:
Civil Society
Courage
Fiction Literature
Integrity
Perseverance
Philanthropic Literature
Book Title: Twisted Author: Laurie Halse Anderson This literature guide part 1 was written by teens for teens to accompany the reading of this "resilience literature." The guide below provides before, during, and after-reading discussion questions to guide reading comprehension and promote dialogue about issues of resilience, trust, independence, family, and community. This guide was written as an assignment in Mrs. Gresham's 11th grade literature class, and includes suggestions for community engagement. 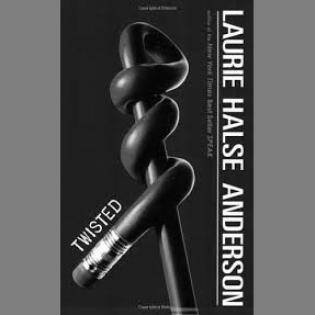 Write a journal about how you felt on your first day of school? Did you fit in? Did you stand out? Did you want to fit in/stand out? Were rumors started over the summer about you involving any parties or misdemeanors? How did those rumors make you feel? Were you bullies for any of those reasons?

The part in the book where Tyler is beat up and his mom freaks out after seeing how badly hurt he is reminds me of the scene in the movie Gran Torino where a similar scene unfolds. In the movie Sue comes home thoroughly beaten, like Tyler, and her parents are very upset. Yet they do not call the police because there is no way to prove who did it to her, just like in Twisted.

For some reason or another the part in the book where Tyler takes the handgun from his dad’s room out to fiddle with it and think about whether he should shoot himself or not reminds me of the movie Stand by Me. The way I picture Tyler holds the gun and is very hesitant with it reminds me of the scene in the movie where Gordie holds a handgun awkwardly to fend off some bullies/hoodlums.

When Tyler goes to a batting cage to deal with his anger by hitting the balls over and over again as hard as he could, putting all his anger, sadness, and frustration into each swing it’s a lot like Part 7 of The Pacific. In Part 7 John Basilone, war hero, is back in the states after intense front line combat to golf. Each swing he can see flash backs to the front lines. He hits bucket after bucket of golf balls and ends up with some nasty blisters on his palms.

Students can create a set of videos that communicate an anti-bullying message. Videos could be live action or animation, informative or abstract. Students should be left with a blank drawing board for them to come up with the ideas themselves. After all the videos are finished you can create a DVD of the finished videos to sell, and donate the proceeds of the sale to an anti-bullying organization or charity.

Your class can spread the anti-bullying message by treating it as a campaign. Work as a class to create a full campaign against bullying. Students should brainstorm ways to use art to advertise the message. Some examples include painting banners and posters with anti-bullying slogans, creating public service announcements on video, or recording a musical tribute to the victims of bullying.

Have the students draw one image of how they look when they feel good about themselves and another for how they look when they feel bad about themselves. Have them write beside each image things that make them feel this way. This activity establishes physical and emotional exploration. Students will connect their positive self-images with the things that make them feel good or bad. Pay attention to how many students identify some type of bullying on their negative images.