Students will explore the causes and effects of bullying and brainstorm ways to address the problem. 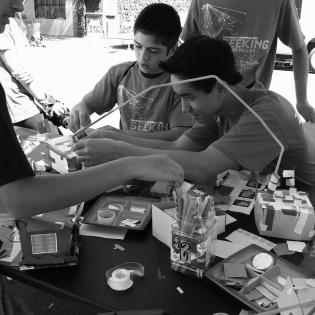 Magazine pictures of young people in different styles of clothing including: religious/ethnic dress, different teen styles, regional differences, and varying degrees of “feminine” and “masculine” clothes on both genders. You’ll need enough for half the class.

service: work done to help another person or organization

bully: a person who habitually acts with the intention of threatening, intimidating, or harming others, particularly people who appear weaker

discrimination: action or treatment based on prejudice or a preconceived opinion

prejudice: a judgment formed about a person or group without enough knowledge

elicit: to draw forth, bring out

Reflection
Ask students to reflect on the session with the following questions: Were you surprised when you compared your judgments about the magazine pictures with others’ judgments? Why or why not?  How might you do a survey differently next time?  What do you think others should know about bullying? How might the concepts of peace and building social capital be applied to create a bully-free school?
Related Resources
Paul Newman
The Saguaro Seminar
Anti-Bullying Units and Lessons