To investigate the effects of governmental philanthropy on a war-torn economy in post WWII Europe. 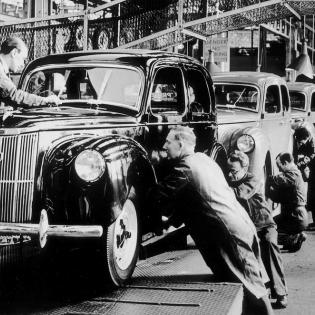 The learners will:Instructor Note: use definitions from www.learningtogive.org/materials/ Altruism Altruism (n) Selfless concern for the welfare of others – altruist (n), altruistic (adj.), altruistically (adv.) Democracy (n, pl., -cies) A form of government exercised either directly by the people or through their elected representatives; rule by the majority; the practice of legal, political, or social equality Foundation (n) An organization created from designated funds from which the income is distributed as grants to not-for-profit organizations or, in some cases, to people Infrastructure (n) An underlying base or foundation; the basic facilities needed for the functioning of a system Independent sector (n) When discussing the nonprofit sector used to emphasize the important role these organizations play as a “third force” outside of the realm of government and private business Non-governmental organization (NGO) (n) Term used by non-American countries to define the nonprofit sector Philanthropy (n) 1. The giving of one’s time, talent or treasure for the sake of another- or for the common good – Robert Payton, 2. Voluntary action for the public good -Robert Payton, 3. Voluntary giving, voluntary service, and voluntary association, primarily for the benefit of others – Robert Payton, 4. Giving and serving –Richard J. Bentley and Luana G. Nissan, 5. Active effort to promote human welfare, 6. A tradition, a spirit, and a sector of society – Maurice G. Gurin and Jon Van Til Private foundation (n) A nongovernmental, nonprofit organization with funds and program managed by its own trustees or directors that was established to maintain or aid social, educational, religious or other charitable activities serving the common welfare, primarily through the making of grants Third sector (n) Independent sector, non-governmental, non-business sector Universal values (n) A common set of morals found to be applicable world wide