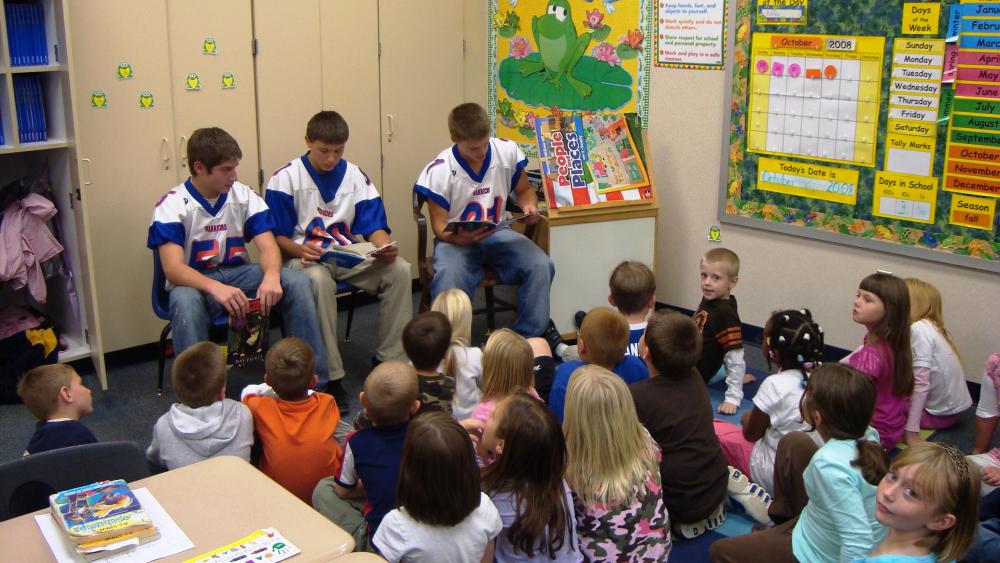 Allowing the opportunity for youth to participate in sports or performing arts, despite their economic background, is a philanthropic effort. Philanthropy comes from the greek word meaning “love of mankind,” and today it focuses on the desire to promote the welfare of others. Young people benefit greatly from sports and the performing arts and the opportunity for extra-curricular activities help them grow in their understanding of giving and generosity; life skills necessary to promote a giving and caring culture.

It wasn’t long after the first state made schooling mandatory for children in 1852 that parents realized there needed to be something to offer children in their time out of school the school day. In 1903, New York City’s Public School Athletic League for Boys was created to keep boys interested in attending activities, clubs, and school. In addition on the performing arts side music education became widespread in the 1900s and was a well-respected subject of study in both public school and secondary education. After World War II, people believed that drama or theatre techniques might be a useful way to foster effective learning in schools. Known as Theatre in education (TIE), Brian Way, an early practitioner, established TIE in 1965 and it spread nationwide.

Today, there has been much controversy over which classes and activities should be offered to students; given a plethora of setbacks including school budget cuts. Schools are forced to choose between sports or performing arts; often choosing to cut performing arts. According to EdSource, in 2017 only a third of 8th-graders in the western U.S. took an art class and only 17 percent played in the school band.

There are a great deal of benefits that come with youth being involved in sports teams and organized athletics. Some are obvious, while others take a bit more know-how. Regardless, when young people experience winning and losing first hand, engage in physical activity with rules and guidelines, and learn respect through collaboration, much can be achieved.

Experience Winning and Losing: Playing a competitive sport allows students to experience the feeling of winning and losing. When it comes to winning, they often learn not to gloat by shaking the hand of their opponent, complimenting them on a good effort, and then celebrating with their teammates. When losing, it teaches youth that it is okay to lose, to focus on the good work they did, then look for ways to improve.

Physical Activity: Participating in a sport allows students to have another avenue to participate in physical activity as it increases blood flow to the brain and activates endorphins, which are chemicals that are released when you exercise. These endorphins positively impact mood and work performance, which helps students in the classroom and at home.

Teaches Respect: Sports involve the students, their teammates, opponents, coaches, and officials of the game. If something is upsetting the student, they learn that arguing when something doesn’t go there way often results in consequence. Also, it places an importance of listening to coaches and referees and following their directions to make sure they are prepared for the game. It also adds a level of critical-thinking and self-efficacy for young people to be able to understand what is required of them, but also to question situations that may feel unethical or uncomfortable. It’s OK to ask why.

Similar to sports, through participation in drama, music, and dance, youth are using art to learn valuable life skills. The performing arts allow for the development and flourishment of self-expression for students to help them establish their identity. In addition, youth are able to use their creativity to create engaging art forms and explore cultures that are different from their own.

Self-Expression: Having different art forms as options, the performing arts allows students to feel that they can freely express themselves, which encourages them to explore their interests and strengths. This self-expression helps students think about who they are and who they want to grow up to be and is crucial for the development of their identity.

Creativity: In theatre, students create their own plays or experience improvising, in dance and music, they create songs and dances that reflect their experiences or new ideas, all which stretch traditional education. Their experience allows them to use their bodies to create and innovate, often times, in the moment, which establishes creative thinking.

Cultural Awareness and Appreciation: Using a hands-on experiences is a way to teach cultural differences and similarities to students. Historically, and today, cultures’ values and customs are seen in drama, music, and dance. By engaging in these activities from other cultures, students begin to appreciate them, and it makes students a better global citizen.

The performing arts and sports have similar learned traits that will be present after a student participates in them. Through both there is an element of teamwork involved which helps to create a healthy community of participants. There are opportunities for leadership and youth begin to develop confidence in their abilities.

Teamwork: On a sports team students must learn to work together with other members to try to win the game. For a drama, dance, or musical performance, students must work together to make sure that the entire performance runs smoothly and takes each individual’s skill and combines it with the others. In each situation they must rely on each other’s strengths towards the overall goal that they are trying to accomplish.

Leadership: Many teams designate a team captain, and there are often leads or first chairs in performing arts. Regardless of holding a role, youth are able to express their ideas and help others who may need help learning how to dribble or hitting a really high note.

Self-Esteem: While working together with others, youth are offered constructive criticism to improve themselves, which leads to developing a sense of confidence in their abilities. At games and at performances, there is an audience that is on-looking the actions of the students, which helps students to be confident in their talents, enough to share with strangers.

Activities to Incorporate Sports and the Performing Arts in the Classroom

The numerous benefits and skills learned through performing arts and sports in schools can easily be introduced in the classroom. Using these activities, students will be exposed to sports and the performing arts in an academic setting, which can inspire them to look beyond the classroom to find an activity that peaks their interest.

Share these examples of famous athletes and artists who have taken up philanthropic causes. These philanthropic examples will introduce students to the causes that support the performing arts and sports, and their impact.

By introducing sports and performing arts inside the classroom, and encouraging participating outside the classroom, students gain the opportunity to learn important life skills. It is important for educators to provide resources for local sports teams and performing arts groups by providing opportunities to connect and grow in community. Both are avenues for students to find their passions, and youth can use these activities to share their talents with the community. Through working together with others to accomplish a goal, students create a stronger communities.