Grade Level:
9, 10, 11, 12
Keywords:
Brave Little Parrot (The)
Buddhism
Courage
Folktales
Generosity of Spirit
Buddhist Tale: Tirelessly working to put out a fire that was harming the homes and lives of others, a small parrot is determined to make a difference. Shaka, King of the Gods, sees his valiant efforts and makes the rain come. We may underestimate our ability to help others, but our efforts often inspire greater forces to come to our aid. 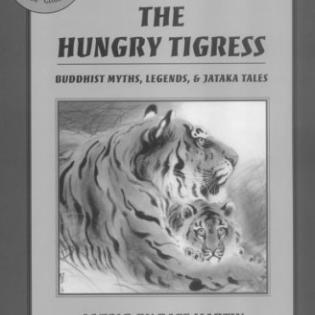 Once, long ago, the Buddha was born as a little parrot. One day a storm fell upon his forest home. Lightning flashed, thunder crashed, and a dead tree, struck by lightning, burst into flames. Sparks leapt on the wind and soon the forest was ablaze. Terrified animals ran wildly in every direction, seeking safety from the flames and smoke.

"Fire! Fire!" cried the little parrot. "To the river!" Flapping his wings, he flung himself out into the fury of the storm and, rising higher, flew towards the safety of the river. But as he flew he could see that many animals were trapped, surrounded by the flames below, with no chance of escape.

Suddenly a desperate idea, a way to save them, came to him. He darted to the river, dipped himself in the water, and flew back over the now raging fire. The heat rising up from the burning forest was like the heat of an oven. The thick smoke made breathing almost unbearable. A wall of flames shot up on one side, and then the other. Crackling flames leapt before him. Twisting and turning through the mad maze of fire, the little parrot flew bravely on. At last, when he was over the center of the forest, he shook his wings and released the few drops of water which still clung to his feathers. The tiny drops tumbled down like jewels into the heart of the blaze and vanished with a hissssssssss.

Then the little parrot once more flew back through the flames and smoke to the river, dipped himself in the cool water, and flew back again over the burning forest. Back and forth he flew, time and time again, from the river to the forest, from the burning forest to the river. His feathers were charred. His feet were scorched. His lungs ached. His eyes, stung by smoke, turned red as coals. His mind spun dizzily as the spinning sparks. But still the little parrot flew on.

At this time, some of the devas—gods of a happy realm—were floating overhead in their cloud palaces of ivory and gold. They happened to look down. And they saw the little parrot flying among the flames. They pointed at him with perfect hands. Between mouthfuls of honeyed foods they exclaimed, "Look at that foolish bird! He's trying to put out a raging forest fire with a few sprinkles of water! How absurd!" And they laughed.

But one of those gods, strangely moved, changed himself into a golden eagle and flew down, down towards the little parrot's fiery path.

The little parrot was just nearing the flames again when the great eagle with eyes like molten gold appeared at his side. "Go back, little bird!" said the eagle in a solemn and majestic voice. "Your task is hopeless! A few drops of water can't put out a forest fire! Cease now and save yourself—before it is too late."

"I don't need a great, shining eagle," coughed the little parrot, "to give me advice like that. My own mother, the dear bird, might have told me such things long ago. Advice! (cough, cough), I don't need advice. I just (cough), need someone to help."

And the god, who was that great eagle, seeing the little parrot flying through the flames, thought suddenly of his own privileged kind. He could see them high up above. There they were, the carefree gods, laughing and talking, while many animals cried out in pain and fear from the flames below. And he grew ashamed. Then one single desire was kindled in his heart. God though he was, he just wanted to be like that brave little parrot, and to help.

"I will help!" he exclaimed and, flushed with these new feelings, he began to weep. Stream after stream of sparkling tears poured from his eyes. Wave upon wave, they washed down like cooling rain upon the fire, upon the forest, upon the animals and upon the little parrot himself.

The flames died down and the smoke began to clear. The little parrot, washed and bright, rocketed about the sky laughing for joy. "Now that's more like it!" he exclaimed.

All the animals looked at one another in amazement. They were whole and well. Not one had been harmed. Up above in the clear blue sky they could see their brave friend, the little parrot, looping and soaring in delight. When all hope was gone, somehow he had saved them. "Hurray!" they cried. "Hurray for the brave little parrot and for the miraculous rain!"

Used with the permission of Parallax Press. www.parallax.org