The Circle of Life and the Clambake 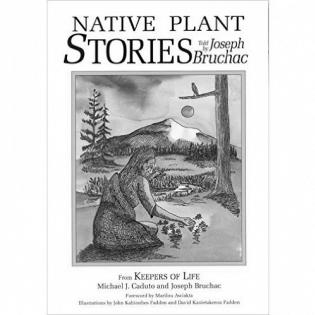 Everything in life is a circle. Everything is alive—the animals, the birds, the plants of Earth and the plants of the seas, the water, the air and the stones—and everything must be respected. All things are part of Earth, which gives us everything we need. When we take from Earth, we must give back in return. The Medicine Circle is the source of our strength.

So the Wampanoag people explain the way they have been instructed by the Creator. For untold centuries, the Wampanoag, the People of First Light, have lived along the southeastern coast of Massachusetts. And their traditions and stories relate to that circle of life which human beings must strive to maintain.

One of the heroes of the Wampanoag is a giant whose name is Maushop. Some sav he lived there on the narrow land now called Cape Cod even before the Wampanoags arrived. He was not alone, for there were other beings there with him. One of his friends was a giant frog which was his closest companion.

Maushop's life was a good one. He swam in the waters of Popponesset Bay. He made great fires on the sandy beach to cook whales and other sea creatures, and when he emp-tied the sand into the sea from his great moccasins he made the islands of Nantucket and Martha's Vineyard.

The Wampanoag became the friends of Maushop and he enjoyed helping them. When they wanted to cook or keep themselves warm, he would carry great loads of wood on his back for their fires. When they were hungry he would drive whales onto the shore so that the people did not have to hunt for food. He was so good to the people that they be-came lazy.
Then Kehtean, the Great Spirit, spoke to Maushop.

"It is good that you care for your younger brothers," Kehtean said, "but it is not right that you do everything for them. They are like little children when you care for all their needs. They must take responsibility for their own lives or they will never grow. If they do not care for themselves, how can they care for the rest of Creation? Their circle will not be strong."

"It is true," Maushop said. Then he said good-bye to the People of First Light. His small friends watched him from the cliffs at Gay Head as he waded into the bay, which was greenish brown with rockweed, and swam away toward the west. As he swam, Kehtean, the Creator, transformed him into a great white whale. Maushop's friend, the giant frog, came to the cliffs, filled with sorrow at the loss of his friend. Kehtean took pity on the giant frog and changed him into a huge stone, which still sits there at Gay Head, looking out to sea. That stone reminds the Wampanoag that Kehtean cares for all things and that the decisions of the Great Mystery are made for the good of all.

Without their friend to help them, the Wampanoag wondered how they would survive. They soon found, how-ever, that when they worked for themselves, everything that they needed was there. One of those ways of survival which makes use of all that is around them—Earth, the plants, the animals and the water—is called by them Appanaug. It is a word which means "seafood cooking," and, because it is a special part of the circle, it is done to honor someone or to mark the change of the seasons.

With thanks in their hearts and with care, they wade into the shallow waters of Popponesset Bay and collect some of the Rock People, old round stones which have been smoothed by the tide. They find a place in the forest which feels right, and there they make a circle and dig a shallow, round hole in the earth. The stones are then placed in that hole, and the shape of the stone and the shape of that hole remind the Wampanoag of the Medicine Circle of all life.

Dry wood is gathered from the forest. No living trees are used. That way they clear the forest floor and make use of another gift given them by Kehtean.

When the next morning comes, they gather quahog clams from the bottom of the bay and sickissuog clams from the shore when the tide is low. Then, from the shallow water, they gather great loads of a seaweed called rockweed. The rockweed is covered with chambers filled with gas, and the body of the plant contains a great deal of salt water. When the fire for the clambake has burned down to ashes and the Rock People are glowing with heat, that rockweed is piled on top of the stones. Steam begins to rise as the salt water in the plants boils, and the clams, along with lobsters and corn, are piled onto the rockweed and then covered with more armfuls of seaweed. The Appanaug is part of the great Medicine Circle of life, one of the gifts of the Great Spirit. So, as the food cooks, the people say prayers of thanksgiving to remember all the gifts they have been given. It is the way it was done long ago and it is still done that way today.