Grade Level:
9, 10, 11, 12
Keywords:
Fairy Shilling (The)
Folktales
Generosity
Generosity of Spirit
Giving
Ireland
An Irish Tale: A man receives a shilling in return for a kindness and soon discovers that no matter where he spends it, the shilling always reappears in his pocket. Finally he takes the shilling to a priest who makes a sign of the cross over it, and it dissolves. Are there some gifts we fear will hold us in their power? 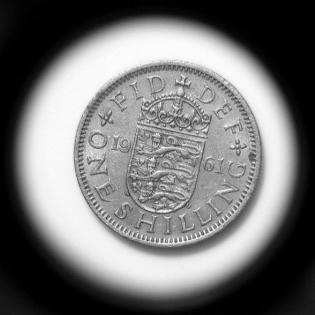 There was a man named Paddy Ó Gadhra living beyond in Malin Glen long ago. One evening he had gone west to Caiseal in Glencoimcille and when his business was finished he faced towards home. It was a fine moonlit night, and as he was going west by Dún Ált at Screig Mhór there was a woman standing at the side of the road with a basket beside her. He greeted her and she greeted him. She bent down and lifted the basket and walked in step with him along the road. He made out from the way she was changing the basket from hand to hand that it must be very heavy.

She thanked him and handed the basket to him. When he took it he was very much surprised because it had no weight at all and he thought it must be empty. They walked on, but neither of them said who he or she was nor asked the other’s name. When they reached the crossroads at Malinmore Paddy said he was going to Malin Glen and maybe that was not the way she was going.

“O, it is!“ said she, “I am going east to Jimί Jeck’s house and I will be staying there till morning.”

She walked step by step with Paddy. The house she was making for was the next house to Paddy’s own on the east. He went as far as it with her and bade her farewell then. When he handed the basket to her, she asked him if he drank.

She put her hand in her pocket and handed a shilling to him.

“Now,” she said, “the next time you are in a tavern, drink my health!”

Then she bade him farewell. Paddy went to his own house and she went towards Jimί Jeck’s house and he saw her no more.

Next morning when Paddy rose he thought he would find out who the unknown woman was, and so he went up to Jimί Jeck’s and asked them who was this woman who had come to them last night.

“Well, that is very strange,” said Paddy, telling him what I have told you about the woman who had been all the way from Glencolmcille with him and who had told him she was going to stop there overnight.

Well and good. Between then and nightfall Paddy needed an ounce of tobacco and went west to a shop in Malinmore and asked for the tobacco. The man of the shop gave it to him and he threw over the shilling and got the change out of it. Going the road home from the west he put his hand in his pocket and looked at his money and saw that he had the change and the shilling as well.

He went on like that for a long time. No matter what shop or tavern he would go into he would get change for anything he would buy and when he put his hand in his pocket the shilling would be back in it. He kept it in that way for a couple of years, but at last he began to fear it. He feared that it might lead him some time to drink too much and to some unknown calamity—that that was maybe why it had been put in his way.

He went to the priest in Glencolmcille and told what had happened. The priest put his stole around his neck and made the Sign of the Cross on the shilling and it vanished as a drop of water. That was the end of Paddy Ó Gadhra’s fairy shilling.

Used with the permission of Professor Ó Catháin and the Folklore of Ireland Council.

Photo Credit: One Shilling by timechaser is licensed under CC by 4.0

Related Resources
The Fairy Shilling
Where Love Is, God Is
Aina-Kizz and the Black-Bearded Bai
https://www.learningtogive.org/sites/default/files/link_bg1.jpg