Grade Level:
9, 10, 11, 12
Keywords:
Character Education: Perseverance
Folktales
Generosity of Spirit
Harvest Birds (The)
Mexico
Natural Resources
Perseverance
A Mexican Tale: A poor man dreams of owning his own land and farming it. Through hard work and wisdom, he succeeds. 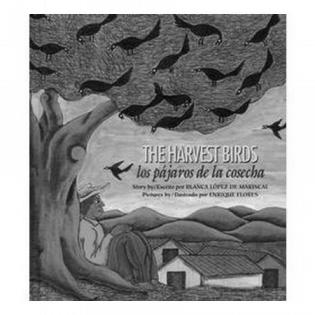 In a little town where everyone knew everyone, there lived a young man called Juan Zanate. He was given this name because he was always accompanied by one or two zanate birds.

Juan used to sit under his favorite tree, dreaming and planning his life. He wanted to have his own land, as his father and grandfather had. But when his father died and the land was divided, there was only enough for his two older brothers. So Juan had to hire himself out to shopkeepers in the town.

“If only I had my own land, my life would be different,” thought Juan. Once, he went to see Don Tobías, the richest man in town, and asked to borrow a little piece of land.

Don Tobías burst out laughing, and his wife laughed with him. “Why should I give you land? You don’t know anything about making things grow.”

Sad and ashamed, Juan returned to sit under his favorite tree. It was the only place where he felt really happy. In its enormous branches lived a flock of zanate birds who were so used to his presence that they considered him their friend.

There was one bird in particular who cared very much for Juan and wanted him to find his way in life. This bird was always around Juan, resting on his shoulder or on the brim of his hat. Juan named him Grajo.

After sitting and thinking for a long time, Juan decided to visit the old man of the town. “Old people know many things because they’ve lived longer,” thought Juan. “Surely he’ll give some advice, and maybe he’ll even help me.”

Juan greeted the old man, whom everyone called Grandpa Chon, with respect. The old man looked at him for a few moments and asked, “Have you just been sitting under your tree, Juan?”

“Yes,” answered Juan, very curious. “But how did you know?”

“When you have lived longer, little Juan, you will see that by watching carefully and observing, you come to know many things,” replied Grandpa Chon.

Yes, but how did you know?” insisted Juan. “My tree is a long way from here.”

“Look at your hat, Juan. You can tell that the birds have been flying around above you.” Grandpa Chon laughed. But it was not mocking laughter, like that of Don Tobías and his wife. This time it was friendly laughter.

When Juan realized that Grandpa Chon was in a good mood, he dared to ask him for a piece of land. “Let me prove to you that I can be a good farmer and make things grow,” he pleaded.

Grandpa Chon became serious. “I will help you,” he said. “I will lend you land. But remember, if you fail, you must work for me for free for as many days as you have used my land.”

Juan ran into the town, shouting his good news. But instead of being happy for him, people mocked him.

“Better you should straighten up my workshop, because where you plant, not even wildflowers will grow,” shouted the carpenter.

“Don’t waste your time Juan, come work on this wheel,” called the blacksmith

“Help me with these sacks of flour and stop dreaming,” added the baker.

But Juan decided that nothing anyone said would stop him. “It’s time to get to work,” he said to himself. He began to prepare his land for planting. It was a very tiny plot of land and didn’t offer much promise of a big harvest. Still, Juan kept on working, accompanied by his loyal friends, the zanates.

“My head is also small, but it is big enough to hold many dreams,” thought Juan.

Juan needed seeds to plant, but didn’t have money to buy them, so he went to the shopkeeper and asked him for some seeds.

“Juan, sweep up the corn, the beans and the squash seeds from my floor and take them to my pigs. Then, if you wish, you can take some seeds for yourself.”

Juan was happy, because now he had seeds to plant. He didn’t scare away the zanates the way the other farmers did. Instead, he gave them some of his leftover seeds to eat so they wouldn’t be hungry and steal the seeds he was planting. After all, the zanates were his friends and companions, and he cared for them very much. Grajo was always with him, giving advice in his hoarse voice.

Days passed, and the zanates guided Juan as he worked. When the tiny plants began to appear and little shoots of weeds along with them, the zanates told Juan not to throw the weeds away as the other farmers did.

“Plant them on the borders of your land, said the birds.

When the other farmers heard what Juan was doing, they laughed at him. “Imagine keeping weeds in your field!”

At harvest time, everyone was waiting to make fun of Juan once again. They were sure he would fail. But when
Juan arrived in town, everyone was astonished. He brought a magnificent harvest: huge ears of corn, brilliantly- colored squashes, and delicious-looking beans.

“How did you do it?” they all wanted to know. Juan smiled and answered, “I did it with the help of my friends the zanates, the harvest birds. I learned to listen very carefully, over and over, to the voice of nature!”

“Work with me, Juan!” everyone shouted. “Teach us your secrets!”

“No,” answered the old man, “Juan works for no one now, because I am going to give him the land that he harvested.”

After selling their crop at an excellent price, Juan Zanate and Grandpa Chon returned together to the little plot of land which was now Juan’s. The old man asked Juan to tell him his secret.

“The zanates taught me that all plants are like brothers and sisters,” replied Juan. “If you separate them, they become sad and won’t grow. But if you respect them and leave them together, they will grow happily and be content.”

Related Resources
The Harvest Birds
Generosity of Spirit in World Folktales and Myths
Aina-Kizz and the Black-Bearded Bai
https://www.learningtogive.org/sites/default/files/link_bg1.jpg