Aina-Kizz and the Black-Bearded Bai

Grade Level:
9, 10, 11, 12
Keywords:
Aina-Kizz and the Black-Bearded Bai
Asia
Character Education: Perseverance
Family
Folktales
Generosity of Spirit
Perseverance
Central Asian Tale: A poor woodcutter is swindled by a wealthy man, but his daughter outwits the man by telling a greater lie. Wit and intelligence are more useful than wealth. 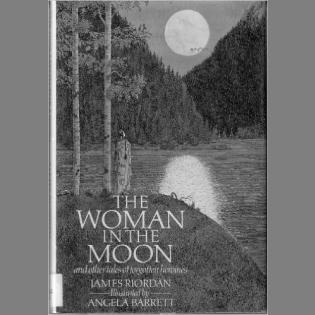 There was once a young girl who lived with her father, a woodcutter. Their home was a tumbledown shack and a gap-toothed axe was the only tool they owned. A lame old horse and mule were their transport. But, as wise folk say, a rich family's fortune is in its herds, a poor family's in its children. And true enough, whenever the old woodcutter gazed upon his daughter, who was only nine, he forgot all his cares and woes. The girl's name was Aina-kizz and she was so clever that people came from miles around to ask her advice.

One day the woodcutter loaded his horse with a pile of logs and told the girl, "I am going to market and will be home by dusk. If I sell my logs I'll bring you a little present."

"May good luck be with you, Father," she replied. "But do be careful, for one man's gain at market is another's loss."

The woodcutter went on his way, arriving in time at the bazaar. He stood to one side beside his horse and awaited buyers for his wood. But no one came. As it was getting late, a rich bai came strutting through the market, showing off his silk robe and stroking his black beard. Catching sight of the poor man and his wood-laden horse, he called, "Hey, old fellow, what will you take for your logs?"

"Will you sell your wood exactly as it is?" the bai asked with a sly grin.

The woodman nodded slowly, unsure of what he meant.

"Here's your coin," said the bai. "Bring your horse and follow me."

When they came to the bai's big house, the poor man went to unpack the logs from the horse's back. But the bai shouted in his ear, "Stop! I bought the wood ‘exactly as it is’—which means the horse belongs to me since it's carrying the wood. If you're not content, we'll go before the judge."

As wise folk say: just as a bad master can turn a steed into a useless nag, so a bad judge can turn right to wrong. And so it was.
Having heard the two complaints, the judge stroked his beard, glanced at the bai's silk robe and gave his verdict: the woodman had got his just desserts. It served him right for agreeing to the terms!

The rich man laughed in the woodman's face, and he, poor man, trudged wearily home to tell his tale to Aina-kizz.

"Never mind, Father, tomorrow I'll go to market," she said. "Who knows, I may be luckier than you."

Next day at dawn, she loaded up the mule with logs and, driving it along with her switch, made her way to the bazaar. There she stood beside the mule until the selfsame bai approached her.

"Hey, girl, what will you take for your wood?" he called. "Two tangas."

"And will you trade it exactly as it is?" he said.

"Certainly," she replied, "if you pay the money exactly as it is."

"Surely, surely," said the bai, holding out his hand to show her two gold coins. "Follow me."

The same thing happened to her as to her father. But she did not mind. As the bai smilingly paid her two coins, she stood her ground.

"Sir," she said, "you bought my wood just as it is and you have my mule together with the wood. But you gave your word to pay the price exactly as it is. So now I want your arm as well."

The bai was taken aback. His beard shook with rage as he cursed her soundly. But she did not yield at all. At last, they set off together to the judge. That worthy man heard the complaint, yet this time he could not help the bai—he had to pay two tangas for the wood and another fifty for his arm.

How the rich man regretted that he had bought the wood, the horse and the mule. Handing over the money before the judge, he told the girl, "You outwitted me this time, but a sparrow cannot match a hawk. I bet you cannot tell a bigger lie than I can; I'll put five hundred on it. You put the fifty I paid you and whichever lie the judge says is the bigger wins the bet. What do you say?"

Winking to the judge, the rich bai began his tale.

"One day, before I was born, I found three ears of corn in my pocket and tossed them through the window. Next morning my yard had become a field of corn so thick and tall it took riders ten days to find a way through. And then, by the by, forty of my best goats were lost in the corn. No matter how hard I searched, I could not find them. They had vanished without a trace. In late summer, when the corn was ripe, my laborers gathered the harvest in and the flour was ground. Rolls were baked and I ate one, all fresh and hot. And what do you think? Out of my mouth leaped one goat, followed by a second and a third.... Then, one by one, out came all forty beasts, bleating hard. How fat they had become—each one bigger than a four-year bull!"

When the bai fell silent, even the judge sat open-mouthed. But Aina-kizz did not turn a hair.

"Sir," she said, "with such wise men as you, lies can be truly grand. Pray, listen now to my humble tale." And she told her story.
"Once I planted a cotton seed in my garden. And, do you know, next day a cotton bush had grown right up to the clouds; it cast a shadow as far as three days' journey across the sands. When the cotton was ripe, I picked and cleaned it, and sold it at market. With the money I received I bought forty fine camels, loaded them with silks and bade my brother take the caravan to Samarkand.
"Off he went dressed in his best silk robe; but I had no news from him for three whole years. Only the other day did I hear he had been robbed and slain by a black-bearded bai. I gave up all hope of finding the villain, yet now, by chance, I have discovered him.

"It is you, bai, for you are wearing my brother's best silk robe!"

At these words, the smiles upon the two men's faces quickly dimmed. What was the judge to do? If he said the story was a whopping lie, the bai would lose five hundred gold coins; that was the bet. Yet if he said she spoke the truth ... that was even worse. She would claim compensation for her brother and, besides, for forty fine camels loaded with rich silks.

The bai roared like a wounded bull, "You lie, you lie! That's the biggest lie I've ever heard! Take your five hundred tangas, take my silk robe, only go and leave me in peace."

With a smile, Aina-kizz counted out the coins, wrapped them in the robe and walked back home.

Fearing for his daughter, the woodcutter was waiting anxiously at the door to greet her. How he hugged her to him, not even remarking on the missing mule.

"Father, I sold our mule with all the logs, exactly as it was."

"Oh, my poor child," he muttered, "so that hard-hearted bai has swindled you as well."

"But I received a fair price for the wood," she said quietly. And she handed him the silken robe.

"This is a handsome robe," he said sadly. "But what good is it to me? Without our horse and mule, we shall likely starve to death."

Thereupon, Aina-kizz unrolled the robe before her father's astonished gaze and the golden coins showered upon the floor. Then she told him the tale of her adventures in the town. How he laughed and cried in turn, listening to her tale. She ended the story thus: "Father, where the rich keep their fortune, so the poor keep their cunning. A girl's wise head is better than a man's full purse."

“Aina-Kizz and the Black-Bearded Bai.” Riordan, James. The Woman in the Moon, and Other Tales of Forgotten Heroines. New York: Dial Books for Young Readers, ©1984. pp. 42-46.

Used with the permission of James Riordan.

Related Resources
The Woodcutter
Ma’ruf the Shoemaker
The Tatema
https://www.learningtogive.org/sites/default/files/link_bg1.jpg