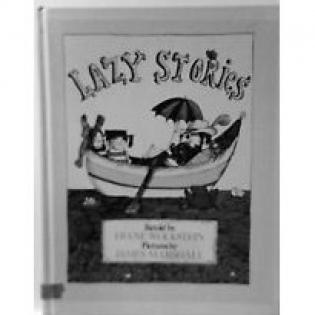 At six o'clock in the morning Mario was fast asleep. And he was still asleep at seven, at eight, at nine, at ten. Usually Mario would wake up about eleven. Then he would ask his wife to go to the store to get tortillas and coffee for his breakfast.

Fortunately for Mario, the storekeeper was a childhood friend of his and never asked him to pay for his food. But one morning the storekeeper woke and said to himself: "Why should I work so hard, getting up at five every morning, while my friend lies in bed all day enjoying himself? No. He will have to help me before I give him any more food."

That morning when Mario's wife arrived at the store, the storekeeper refused to give her any food. "Tell your husband that I'm building an extra room on my house and I want him to help me carry some large rocks from the quarry. After he helps me, then you can come for the food."

"Oh no!" said Mario, when he heard what the storekeeper had said. "Those rocks are much too heavy for me to move. How many times must I say: If God wishes to give, He will give, even if He has to push it in through the window? Please, no more talk of work." With that, he dressed and left the house.

Mario was walking up the hill and watching the clouds drift across the sky, when suddenly he heard shouts behind him.

Turning around, he saw a runaway horse, heedless of his rider's cries, charging up the path.

“WHOO-AA WHOA!” the rider cried again, but the horse paid no attention.

Just as the animal raced by, Mario leaped forward without thought for himself, grabbed the bit, and brought the horse to a halt.

Mario held the reins while the rider dismounted. The rider was an old man with a long white beard.

"You are both wise and brave," he said to Mario. "You do not run here and there like the others, but when the moment is important, then you are there. You risked your life for me today and I want to reward you by giving you a tatema."

"A tatema is a gift given by God to man," the old gentleman explained, "and only the man God gives it to may keep it."

He motioned for Mario to follow him and they continued up the hill. Then the gentleman stopped and pointed to a large flat rock. "Underneath that rock," he said, "are oak leaves. Under the oak leaves are wooden chests. If you open the chests you will find the tatema waiting for you."

Mario scooped up a handful of coins and put them in his pocket. Then he closed all six chests, covered them with leaves, and put back the rock. By now he was exhausted. He sat down under a tree to rest and fell asleep.

When Mario woke up, it was late in the afternoon and he was hungry. As he hurried down the hill for his supper he heard a clinking noise. He stopped. The noise stopped. He started on again and the clinking began again. Then he put his hand in his pocket and brought out . . . six silver coins.

When Mario's wife put the coins in the storekeeper's hands, she said: "My husband sends you these. We need rice, beans, a chicken, tortillas, tomatoes, and coffee."

The storekeeper looked at the silver coins in amazement. "How did Mario get so much money?" he wondered aloud.

"Come to our house tomorrow," the wife said, "and he will tell you."

The next afternoon the storekeeper heard the whole story.

"But, Mario," he asked, "why didn't you bring the chests home with you?"

“Oh, they were much too heavy," Mario said. "I would need mules to carry them and I have no mules. Anyway, by now, dear friend, you should know: If God wishes to give, He will give, even if He has to push it in through the window."

"I have mules," the storekeeper said. "I will come to your house tonight and we will go to the rock together. If you give me three of the chests, my mules will carry all six down the hill. What do you say?"

The storekeeper returned to his store. But the whole rest of the day he kept thinking to himself: "Why should I divide the treasure with Mario? After all, it is I who own the mules. He will never own mules. He would never even know what to do with his share of the money. Whereas I, I shall buy more mules, build a larger house …”

That night at eleven o'clock Mario was sound asleep.

"Husband," said his wife. "Wake up. It is past eleven and your friend has not come."

An hour later the wife woke her husband again.

"Husband, wake up! It's midnight and I'm afraid your friend has decided to keep all the silver for himself."

"Midnight? So late? It's much too late to go anywhere now. Wife, come to sleep."

So the wife lay down and she and Mario both slept soundly through the night.

Meanwhile the storekeeper had arrived at the flat rock with his mules and his servants. He ordered the servants to remove the rock and look under the leaves. They did so and found the six wooden chests. "Open them quickly!" the storekeeper said. But when the servants opened them, they saw the chests were filled, not with silver, but with foul-smelling mud.

"My friend has tricked me!" the storekeeper cried. "Well, I will trick him right back!" He ordered his servants to load the chests onto the mules, to carry them down the hill, and to dump all the mud in front of Mario's house. They did this and rode away.

The next morning when Mario's wife woke up, she could not open the door. She tried the wooden window, but it too was stuck.

"Husband, wake up," she said. "There is something outside our house and we are trapped inside."

"Husband," the wife said, "your friend came after all!"

Later that morning the wife went to the store and ordered not only food, but new clothes for herself and Mario. Before the storekeeper could question her, she put down on the counter twenty silver coins and said:

"How kind you have been to us! We waited last night until midnight and I was afraid you had changed your mind. But then this morning the coins came pouring in through the window. Surely you gave us more than half."

"Of course it was you. Who else would have left all those silver coins outside our house?"

There was silence in the store.

Then the storekeeper said quietly, "Your husband has already told us: If God wishes to give, He will give . . . even if He has to push it in through the window."

Used with the permission of Clarion Books, an imprint of Houghton Mifflin Company.