A Boy and His Donkey

Grade Level:
9, 10, 11, 12
Keywords:
Boy and His Donkey (A)
Folktales
Generosity of Spirit
Sharing
Hispanic Southwest Tale: A young boy sets out to look for work to help his mother, and on his way he meets the Virgin Mary. She gives him three apples and advises him to recognize a worthy companion by offering a part of the apple and seeing which half is accepted. 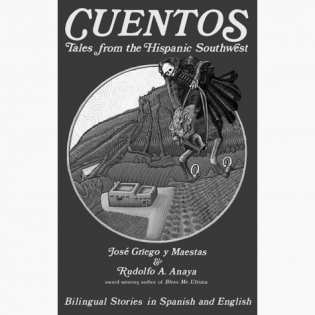 Once there lived a very poor woman who lived alone with her only child. One day the son, who was only ten, decided to seek work. “Mother,” he said, “let me go out and look for work.”

His mother would not permit him to go because he was too young. But the boy insisted that he should go out and look for work to help support her. He bothered her so much that one day she finally relented. She prepared a packsack with provisions for her brave young son, gave him her blessing, and sent him on his way. The lad then loaded the provisions on his donkey and set out to look for work. He didn’t know which direction to take, so he wandered until he was far from home.

But the Virgin Mary, who was the boy’s patron saint, and the prayers of his mother guided him. On the road he traveled he met a woman dressed in a blue robe.

“Where are you going, my son?” asked the woman, who was in truth the Blessed Virgin.

“I am looking for work to support my mother.”

“You are a good son, but you must be very careful because there are many evil men on this road who may harm you,” she warned him.

“They can’t harm me,” the boy answered, “because I have nothing they can steal.”

The Virgin smiled. “Since you are determined to continue your journey, here, take these three apples. Whenever you meet someone who wants to travel with you, cut an apple in half, but always cut one half smaller than the other. Offer both halves to the person, and if he takes the bigger half then do not count that person as your friend. He is a bad person, and may harm you. But the person who takes the smaller half will be a good friend whom you can trust.”

The boy tucked the three apples in his coat pocket and continued on his way. That evening he met a man who asked him if they could travel together as companions and the boy agreed. When they stopped to rest that evening the boy cut one of the apples in half, remembering to leave one half smaller than the other. He offered them to the man. The man reached for the bigger half.
This is not a good companion, the boy thought. And he was right because it was the intention of the man to steal the donkey once the boy was asleep.

That night, although he was very tired, the boy didn’t sleep. When he was sure the man was asleep he got up very quietly, gathered his provisions and hurried to his donkey. He loaded his burro and fled.

When the thief got up to steal the burro he found both the boy and the donkey gone. The thief cursed his luck and wondered how the boy had known his intentions.

Later on his journey, the boy met another man. The man suggested to the boy that they could travel together since they were going in the same direction. The boy agreed. That evening he cut the second apple in half, again cutting one half smaller than the other. He offered them to the stranger and the man immediately took the biggest half. So the boy knew this was another sly man to beware of.

That night as soon as the man had fallen asleep the boy got up very quietly and carried his pack to where his burro was hobbled. He packed his provisions and was far away by the time the thief awakened to find himself alone with his evil intentions. The very next day the boy met up with an old man.

“Where are you going, my son?” the old man asked.

“I am going to the city to look for work,” the boy replied.

“There are many thieves on this road. They might harm you.”

“They can’t harm me,” the boy answered, “because the prayers of my mother and the Blessed Virgin Mary protect me.”

“Very good, my son,” the old man nodded. “I am going in the same direction. Why don’t we travel together?”

The boy agreed and they continued together. That evening when they had arrived at a campsite, the boy cut his last apple in half, again leaving one half smaller than the other. He offered them to the old man, and the old man took the smaller piece.

The boy leaped out of his bedroll and ran in search of his burro. But when he went down to the pasture he found them both. The old man had simply moved the burro to where there was better pasture. From that day on they traveled together and became good friends, and eventually the boy found work, and sent money to his mother.

Related Resources
Generosity of Spirit in World Folktales and Myths
The Cruel Creditor and the Judge’s Wise Daughter
Lo-Sun, the Blind Boy
https://www.learningtogive.org/sites/default/files/link_bg1.jpg