A Calabash of Poi

Grade Level:
9, 10, 11, 12
Keywords:
Act of Kindness
Calabash of Poi (A)
Folktales
Generosity of Spirit
Hawaii
Kindness
Pay it Forward
Hawaiian Tale: Pele, the Goddess of fire, disguises herself as an old woman and visits two families. She is not welcomed at the first home, but is generously received at the second. “Don’t you ever forget to be nice to the old folks,” is the moral pronounced at the end of the story. 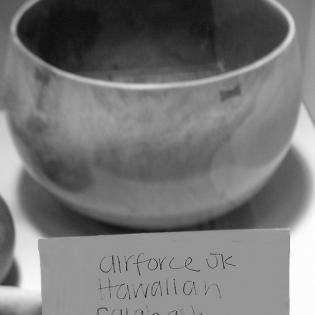 One of the disguises which Pele, the goddess of fire, was fond of assuming was that of an aged hag. In fact, it was hardly a disguise at all, for Pele was as old as the hills themselves; besides her quick tem-per and natural jealousy had furrowed her face with deep, hard lines, which a bitter disposition imprints upon a face, quite irrespective of its age. On this day Pele was intent upon a secret mission, and, taking a gnarled branch of the koa-tree for a cane, she trudged at a rather brisk pace down the mountain-side. Only on approaching two Hawaiian houses of varying pretensions did she slacken her speed and finally pause at the outer palisade of the first.

It was a sizable house, or hale, as Hawaiian houses go, perhaps fifty feet long with its side thatched with ti-leaves—a sign of rank. Its only window, a small aperture about a foot square, looked out on a carefully planted taro patch, while rows of tasseled cocoanut palms and fruit-laden banana plants made a pretty background to the setting.

Pele paused for a moment to make a mental summary of the growing crop, and then grasping her cane, hobbled to the threshold.

"Aloha," she said to the small group of people sitting within the door-way.

"Aloha," was the reply in a not over-cordial tone of voice.

Pele waited—apparently there was to be no invitation to enter or to refresh herself.

"I have walked many miles," she said finally, assuming a small and feeble voice. "I am very hungry. Perhaps you have as much as a calabash of pots for me."

"We are very sorry, but we have no poi," said the Hawaiian chief, for such was the master of the house. "Besides our evening meal is pau."

"Then, perhaps, a small piece of salted fish?"

"No, nor fish," was the short rejoinder.

"Then, at least, some ripe ohelo berries for I am parched with thirst?'

"Our berries are all green, as you can see for yourself, providing your eyes are not too dimmed by age."

Pele's eyes were far from dim! She suppressed with an effort the flashes of fire that ordinarily blazed in their black depths at a moment's provo-cation and, bowing low, made her way in silence to the gate. Passing a few steps further down the hard road, she entered a smaller and less thrifty garden and paused on the threshold of a small hut. The work of the day as well as the evening meal was over, and the family of bronzed-skinned boys and girls played about the man and woman who sat watching in rapt attention the last golden rays of the sun sinking in a riot of color behind the gentle slopes of Mauna Loa.

"Ah, I see your evening meal is past;" sighed Pele. "I am sorry for I am both tired and hungry, and had hoped for a little refreshment after a day's walk down the steep mountain."

"Neither fish nor awa have we," promptly said the poor fisherman, "but to such as we have you are most welcome."

Almost before he had concluded these few words, his wife had risen, motioned Pele to a place on the mat and set before her a large calabash of poi.

Pele did not wait for a further invitation but fell to eating with much relish. Dipping her fore-finger in the calabash, she raised it dripping with poi, waved her finger dexterously in the air wrapping the mucilaginous poi about it, and placed it in her mouth. She seemed to finish the entire contents in no time and, looking up, remarked:
"I am still hungry. Would it be too much to ask for another cal-abash?"

Again the woman arose and placed before her a second calabash of poi, not perhaps as large as the first but filled to the brim.
Again Pele emptied the calabash with great relish. Wishing to test the extent of their patience and generosity, she sighed as she finished the last mouthful, calling attention to the empty calabash in her lap.

This time a third calabash smaller than the second—but quite full, was placed before her. Pele finished half of the third calabash, arose heavily to her feet, and, pausing before the chief, she uttered these words:

"When your neighbor plants taro, it shall wither upon its stem. His bananas shall hang as green fingers upon the stalk, and the cocoanuts shall fall upon his favorite pig. When you plant taro at night, you may pull it in the morning. Your cane shall mature over night and your bananas ripen in one day's sunshine. You may have as many crops as there are days in the year!"

Saying these words, Pele trudged out of the gate and was seen to disappear toward Ha-le-mau-mau in a cloud of flame.

When the astonished fisherman passed beyond the threshold of his hut on the following morning, yellow bananas hung on the new plants, the full grown taro stood ready to be pulled, and the cane-cuttings reached to the eaves of his house. Looking across at his rich and powerful neigh-bor, he saw that, indeed, the curse of Pele had already descended upon him. In place of the rich man's prosperous acres stood the sun-parched remnants of but yesterday's proud crop.

"There, children," said Alec, the old half-breed guide, "Whether [you believe] in the ole lady Pele or not, don't you ever [forget] to be nice to the ole folks. It just might be Pele. [You] can't always [tell]."

Photo Credit: Hawaiian by airforceJK is licensed under CC by 4.0