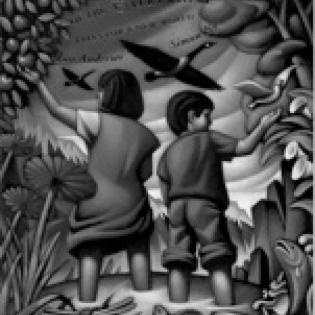 Everyone brings something to a new country. Part of what Sayed brought was a terrible fear of never having enough. He had his reasons. In the small village he had come from, he had had so little.

He did not have little now. He lived in a big city. Through his intelligence and hard work, he had prospered. Still, the memories of his boyhood and his struggles would not leave him. He scrimped and saved far beyond what was needed. He was afraid to give away too much and so he gave away nothing. He kept all he possessed long after it should have been thrown out.

People who knew him saw this in the clothes he wore and the furniture he lived with. Mostly they saw it in the boots he faithfully pulled from his closet as each new winter approached. Those boots were the first good, truly warm pair he had bought himself.

But, oh, how battered they were; how patched and worn! There was hardly a scrap of the original material left in them. "Next winter," Sayed would say when someone suggested he might buy a new pair. The next winter went by and the next, but it was always the same. He would think about replacing the boots and then he would say to himself, "I only have to fix that eyelet. I only have to mend that hole, there, in the sole."

A year came when his trading was more successful than ever; a day came when he made himself an especially good deal. He met a friend in a small cafe and told him all about it.

"Do yourself a favor," his friend suggested. "Treat yourself. Get rid of those old things on your feet."

The friend would have gone with Sayed to the shoe store at that very moment, but Sayed was not certain. He looked and looked at his boots, but he could not make up his mind.

Anyway, it was time for prayer. He had to go to the mosque. As he entered, he removed his footwear according to the custom. Many people had come to worship. There were pairs of boots and shoes of all shapes and sizes by the door.

Sayed set his own down among all the others. He went to his devotions, but when he was ready to leave, search as he might, his boots were nowhere to be found.

In the place where he thought he had left them, there was a brand-new pair. These were the finest boots that he had ever seen. They were just his size, too.

A smile came to his face as he became more and more certain that God had chosen to reward him. He slipped the boots on gratefully. Stepping out into the winter darkness, he went home.

He was eating his evening meal when he heard a knock at his door. Hoping it might be his friend and excited at the prospect of telling him about his good fortune, Sayed hurried to answer.

On the doorstep stood another man from his community—a leader, someone he did not know very well. This man was very angry indeed.

He wore a fine overcoat and a fine hat. He had fine gloves on his hands, but his feet were not so well covered, for he was wearing Sayed's old boots.

Sayed gave the new boots back at once.

"I knew these ones were yours, of course," the man burst out. "Everyone knows these boots. They are a shame! A disgrace!"

That was not the end of it, for the man was so outraged that he told everyone he could. Soon enough, everyone was laughing.

Sayed was ashamed. He bought new boots for himself, but the teasing still went on. Now there was nothing he wanted more than to be rid of those old boots that had been so precious to him.

He went to the bridge that crossed the frozen river. Tying the boots together, he threw them as far as he could onto the ice.

"They can freeze for all the trouble they've caused me," he thought to himself. "They can wait and wait through all the months of coldness. They will be swept away with the ice chunks in the end."

Spring came and the river melted. One day Sayed saw that there was only water flowing and churning where the boots had been. He wanted to dance, he was so relieved.

The relief did not last long. A friend went fishing and found the boots on the end of his line. When Sayed came home from work, the boots were outside his door as if they had been waiting for him. Everyone started laughing at him again.

He decided he would take the boots out and bury them. He would dig a hole deep under the bushes in a local park.

He waited until night fell and set off. A man saw him and believed he was doing something suspicious and called the police. Sayed was arrested and fined for causing mischief. The laughter grew louder.

"All this for a pair of boots," people chuckled.

Off he went to a place in the country where there was a smaller river. He threw the boots into the water.

All seemed to be going well until he saw a headline in the newspaper: "Town's water supply damaged." Under the headline there was an article about a channel being obstructed. Above the article, there was a photo of the cause.

This time Sayed's fine was even bigger because he had truly done damage. Even worse, the boots were still in his possession.

He would burn them. That was the only solution. In order to burn them, he had to dry them out. He put them in the sun in his front yard. A dog came by. It saw the boots, picked them up and shook them, and went running off with them in its mouth.

The dog ran into the road, almost causing an accident. It took the boots home and dropped them at the feet of the baby of the household. The baby grabbed them up and sucked on them. A piece came off and stuck in the baby's throat. The baby almost died.

Again Sayed was blamed. By now he was worrying about the boots so much that his business had begun to suffer. He was losing money all the time.

He thought about cutting the boots into tiny pieces with knives, or scissors, or even an ax. He thought about shredding them into fragments, boiling them in a pot, cooking them up to nothing—eating them for supper, even. Anything to be certain they would finally be gone.

At last it occurred to him that perhaps someone poor might find the boots useful. He went to the Thrift Shop to donate the boots, but the clerks there simply shook their heads. He went downtown among the street people, but even the street people did not want his gift.

Finally he came upon a man who was sitting in a doorway. This man was barefoot. Sayed offered the boots to him. The man took them, looked at them and threw them angrily in Sayed's face.

Again there came a knock at his door. It was the friend who had wanted to help him get new boots in the beginning.

"Please," Sayed begged. "The old boots are ruining my life. Please save me from them. Please...please take them away."

The friend let out a laugh. "Why don't you just put the old boots in the garbage?" he suggested.

"It is not enough," Sayed answered.

"Of course it is," his friend replied.

Slowly Sayed picked up the boots. Slowly he went to the kitchen. He put the boots into a garbage bag, tied the bag tightly and carried it outside.

What happened next? The garbage was taken away and the boots went with it. The days turned into weeks and the weeks into months and the boots did not return.

Sometimes they came to Sayed in his dreams, but even that happened less and less often. Gradually he restored his business and made it more successful than it had ever been. Gradually people stopped laughing at him. At last he did not even dream of the boots.

Best of all, he began to change. He could not break himself of his old habits all at once, of course. Still, although he went on keeping his possessions longer than was needed, he learned how to get rid of them, too.

He found he was happier. He became more generous. In winter, he bought boots for those who were needy. Whenever he was asked, he gave money. When money was not enough, he sought out other ways to help.

Used with the permission of Jan Andrews, Simon Ng, and Groundwood Books. www.groundwoodbooks.com

Related Resources
Where Love Is, God Is
Ma’ruf the Shoemaker
Bokwewa (The Humpback)
https://www.learningtogive.org/sites/default/files/link_bg1.jpg