The Sustainable Development Goals and Philanthropy

Grade Level:
6, 7, 8, 9, 10, 11, 12
Keywords:
Global Community
Global Issues
Philanthropic Organizations
Social/Cultural Issues
United Nations
The Sustainable Development Goals are a broad set of 17 goals adopted by all countries in the United Nations in 2015. They provide a set of universal goals to guide philanthropic organizations around the world as they pursue to make the human condition better. The implementation of the SDGs will require the cooperation of governments, business, and the philanthropic sector.

The Sustainable Development Goals (SDGs) are a broad set of 17 goals and 169 targets that were adopted by all countries in the United Nations in 2015. These 193 countries account for 99.3% of the world population, and their joint declaration to tackle these goals is the world’s largest cooperative development effort (Rosenburg) The 17 SDGs are pictured below. These goals are being implemented with the intended deadline of 2030. Every year, an international body called the “High-Level Forum on Sustainable Development” publishes a report on the progress of each goal with data collected from around the world. 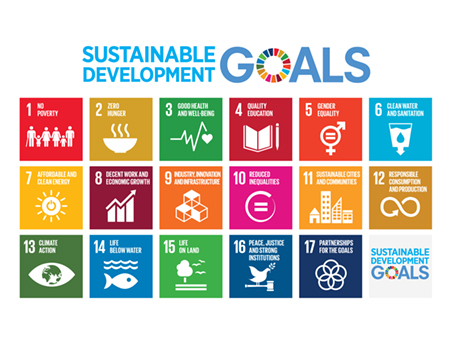 History of the Sustainable Development Goals

In June 1992, 178 countries adopted Agenda 21, the first international development plan to improve human life and protect the environment (“Agenda 21...”). Agenda 21 started the Commission on Sustainable Development, which provided a space to monitor progress on Agenda 21 and discuss ways to improve Agenda 21. It also started an annual Conference on Sustainable Development which continues to this day (“Agenda 21…”). Eight years later, the world’s leaders published the Millennium Declaration to begin 2000. Among other things, the Millennium Declaration outlined 8 goals to be completed by 2015 in order to reduce extreme poverty around the world. These goals, known as the Millennium Development Goals, included the eradication of extreme poverty and hunger, the achievement of universal primary education, and the assurance of environmental sustainability (Deglau).

The Millennium Development Goals showed some great successes: the number of people living on less than $1/day worldwide was nearly halved; enrollment in primary schools in Sub-Saharan Africa increased by 18%, and over 100 million slum dwellers found other housing (“Sustainable Development Goals…”). However, there were problems with the Millennium Development Goals that some countries wanted to see fixed. Critics said that the worldwide goals had been developed by only a few countries, that they left behind the poorest people, and that they didn’t allow for national differences. (Fehling, et. al)

So in 2012, UN members decided to begin a process for developing the new Development Goals in a more inclusive manner. They developed a 3-year process to develop development goals after the end of the MDGs in 2015. A group of 30 countries worked for 2 years to create “a shared vision of humanity and a social contract between the world’s leaders and the people” (Thomson). It incorporated the input of over 30 million people around the world, and was called by the UN Secretariat “most transparent and inclusive process in UN history” (Thomson). Since 2015, there have been 3 annual reports on the progress of the SDGs.

These Sustainable Development Goals are important because they are a unified set of goals approved by (nearly) every nation in the world. According to Dr. Robert Payton, Philanthropy is an action of the moral imagination (Payton and Moody 2008). With this understanding, it makes sense that getting the entire world to agree on what a better world looks like is a necessary first step in improving the human condition across the world. They allow for social mobilization across the world (Sachs). Additionally, the SDGs create peer pressure between nations. Though they ae not legally binding, political leaders are now able to judge other leaders by their ability to eradicate poverty, advance education, and reverse climate change.

The Sustainable Development Goals go even a step beyond giving the world’s leaders a clear direction and pressuring them to do so. The United Nations has provided frameworks for developed nations to share funds and research with developing nations so that all nations have the ability to meet their SDGs (“Millenium Development Goals Report” 2015). The creation of these networks spurs investment in nations that would previously struggle to find the resources to eradicate poverty.

While the pronunciation of clear goals is only the first step in solving the issues, the UN’s experience with the Millienium Development Goals shows that these are an extremely promising method to solve humanitarian problems. Under the inspiration of the Millennium Development Goals, several issues saw marked reductions. 6 million malaria deaths were averted among young children, primary school enrollment increased from 83% to 91% in developing countries, infant mortality dropped by 52% worldwide, and development funds from 1st world countries to 3rd world countries increased by 66% (“Millenium Development Goals Report” 2015). With a broad new set of goals that have been assembled with the help of multiple stakeholders, the new SDGs have the potential to create a transformed world by 2030.

Ties to the Philanthropic Sector

The implementation of the SDGs will require the cooperation of governments, business, and the philanthropic sector. The United Nations’ primary role is to offer the unifying goals, facilitate resource sharing, and do an annual progress report. These functions are helpful, but they will not complete the goals unless governments, businesses, nonprofits, and communities collaborate creatively.

Important People Related to the Topic

This briefing paper was authored by a student taking a philanthropic studies course at The Lilly Family School of Philanthropy.