We Are Not Yet Equal

Grade Level:
9, 10, 11, 12
Keywords:
Black History
Civil Rights
divlit
Equity
Jim Crow Laws
Race
Social Justice
Voting
by Carol Anderson and Tony Bolden - A literature guide for youth, parents, teachers, and group leaders to accompany the reading of this novel. The guide below provides before, during, and after-reading discussion questions. Choose from activities and discussion questions to build understanding of the story of civil rights and race relations and what it means in the current world they are living. 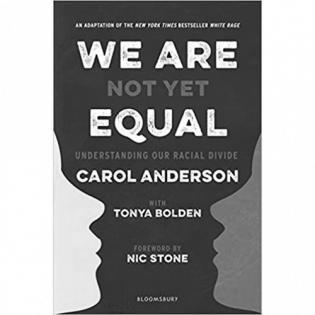 This book is an adaptation for young people of the New York Times Bestselling book, White Rage. This book received several accolades including, an NAACP Image Award finalist book, a Kirkus Reviews Best Book of the Year, and a NYPL Best Book for Teens.

History texts often teach that the United States has made a straight line of progress toward Black equality. The reality is more complex: milestones like the end of slavery, school integration, and equal voting rights have all been met with racist legal and political maneuverings meant to limit that progress. We Are Not Yet Equal examines five of these moments: The end of the Civil War and Reconstruction was greeted with Jim Crow laws; the promise of new opportunities in the North during the Great Migration was limited when blacks were physically blocked from moving away from the South; the Supreme Court's landmark 1954 Brown v. Board of Education decision was met with the shutting down of public schools throughout the South; the Civil Rights Act of 1964 and Voting Rights Act of 1965 led to laws that disenfranchised millions of African American voters and a War on Drugs that disproportionally targeted blacks; and the election of President Obama led to an outburst of violence including the death of Black teen Michael Brown in Ferguson, Missouri as well as the election of Donald Trump.

Including photographs and archival imagery and extra context, backmatter, and resources specifically for teens, this book provides essential history to help work for an equal future.

Ask: What do you feel are the root causes of racism?

Connect: Drawing upon your prior knowledge of United States History, what historical instances of racism can you recall? How do you feel these instances affect today’s world?

Show: In the Declaration of Independence Thomas Jefferson penned the words, “We hold these truths to be self-evident, that all men are created equal, that they are endowed by their Creator with certain unalienable Rights, that among these are Life, Liberty and the pursuit of Happiness.” How close is the America of today to matching this vision,?

Connect: We Art Not Yet Equal focuses on certain watershed periods of U.S. History from the Civil War to President Obama’s second term. Why do you think the author chose to examine these times specifically? Are there other moments in history that can be looked at through the scope of white rage?

Ask: For some, legality and morality might intersect, but there are many instances in this book where the author shows lawmakers, judges, and politicians using the law to serve their white rage. What are some instances from the book in which these occur? Can you think of other examples from current events where this has happened, too?

Connect: What are ways in which people today can take action to address "white rage"? Think about legal and government systems that perpetuate bias.

Ask: What role has the media played in perpetuating violence and inequity against African-Americans? Has this changed over time? What are some ways that you can identify media biases?

Connect: How and where are teens affected by white rage? Do teens experience its effects differently than adults? Why or why not? How do these dynamics play out in a school setting?

Ask: This book focuses primarily on African-Americans and Black History. How do the author’s arguments affect how you view the broader scope of U.S. History?

Connect: Think about the title of the book. Do you agree with its assertion?

Connect: Explore further books related to the themes in this book:

Show: This is a video of Professor Anderson speaking at Emory University. Watch portions, or the entirety of this talk at: https://www.youtube.com/watch?v=YBYUET24K1c

We Are Not Yet Equal Chapter Guide.pdf
https://www.learningtogive.org/sites/default/files/link_bg1.jpg