Grade Level:
9, 10, 11, 12
Keywords:
Asia
Folktales
Generosity
Generosity of Spirit
Gifts
Giving
Palestine
Woodcutter (The)
A Palestinian (Arab) Tale: A poor woodcutter drops a fava bean down a well and starts moaning. The spirits who live in the well give him a series of magic objects to keep him quiet. He loses the first two to his neighbors, but then regains them. Even foolishness is sometimes rewarded with useful gifts. 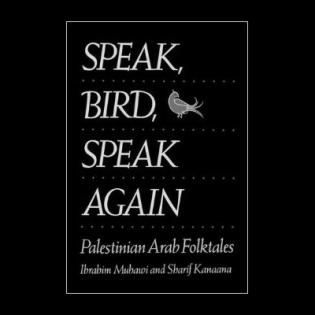 Once upon a time there was a poor man, a woodcutter. Every day he would bring a bundle of wood, sell it, and eat from his earnings. One day, before setting out to the woods in the morning, he roasted a handful of fava beans to entertain himself along the way.' He walked along munch-ing on them, taking the road to Bab it-Wadi. As he approached the well belonging to the house of Yusif is-Sliman (members of the community and neighbors of the teller), the one in the middle of the road, he tossed a bean up in the air—but it did not land in his mouth, it fell right into the well. Driven by his poverty and his sadness over its loss, he squatted by the mouth of the well and cried out: "Oh! My fava bean, My protection against hunger! Oh! My fava bean, Oh! My fava bean, My protection against hunger!" And how he cried over the loss of that bean!

Now, the well, in it they say there were (in the name of Allah, the Compassionate, the Merciful!) dwellers (jinn, or genie, who inhabit springs, cisterns and running waters).

"Hey uncle, leave us alone!" they answered him. "What's the matter with you? You hurt our ears with all this din!"

"I want my lava bean back," he answered, crying again: "Oh! My fava bean, My protection against hunger!"

"Uncle!" they said, "Is it worth all this din? Here! Take this wooden bowl—whatever you tell it to fill with, it will fill, and you can eat something other than these fava beans (used to serve meals for the household)."

Taking the bowl with him, he went back home. He brought it into the hut with him, locked the door, and said, "Wooden bowl, fill up with rice and meat, topped with yogurt sauce!" And what do you think happened? Before he even had time to look, the bowl had filled with rice and meat, and with sauce covering them. And what now, you might ask? He ate until he could barely move, and every day after that—evening, morning, and noon—he would tell the bowl to fill with whatever food he wanted to eat. He then ate and threw away the rest.

One day he felt bored. "Am I just going to sit around in this shack?" he asked himself. "By Allah, I want to go out and have a good time. But what am I going to do with this bowl?" Then he said, "By Allah, I'm going to leave it with our neighbor"—you might say at the house of Im Falah. Going over to her house, he knocked and said, "Hey, lm Falah, Allah save you! Would you mind keeping this wooden bowl in your house and taking care of it? And mind, don't wreck it while I'm gone by saying to it, `Wooden bowl, fill with rice and meat; or with cracked wheat, noodles and tomato sauce!' and then eating from it! I'll be gone for a couple of days to have a good time, then I'll be back."

No sooner had he turned his back than lm Falah said, "Wooden bowl, fill with rice and meat, topped with yogurt sauce!" And what! They had barely time to look, when it became full to the brim. The whole family ate till they were stuffed.

"Yee! By Allah, he'll never see it again. We have an old bowl just like this one, and when he comes back we'll give it to him instead. May he never eat! He's all by himself, and we're a whole family. What does he need it for?"

Coming back, the woodcutter knocked on their door, "Im Falah!"

"For the sake of Allah," he answered, "give me back the wooden bowl. I'm dying of hunger, and I want to go home and eat."

When he went to see Im Falah about it, she said, "I don't know what you're talking about, brother. That's the one you brought here and I gave it back to you. What can I do?"

So back to the well he went, and—splash!—dropped it in and started moaning: "Oh! My fava bean, My protection against hunger!"

"What's the matter with you?" asked the dwellers in the well. "Didn't we give you the wooden bowl?"

Related Resources
The Young Man Who Refused to Kill
Where Love Is, God Is
Three Laughs
https://www.learningtogive.org/sites/default/files/link_bg1.jpg