This lesson explores the heroic actions of one American woman--Rosa Parks. Students will read about her refusal to give up her seat to a white person and the resulting bus boycott that ended segregation on the city buses in 1956. Rosa Parks' acts of philanthropy brought a community of people together for the common good and resulted in major social change in her community and in the nation. Students will identify the relationship of individual rights and community responsibility. 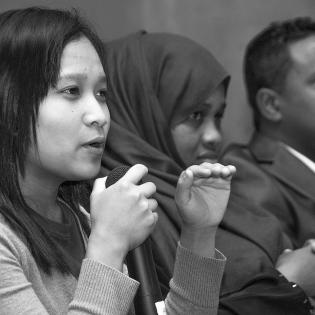 Time www.time.com/time/time100/heroes/profile/parks01.html (a good site for a summary of Rosa Parks' life as well as links to other resource sites)

Students will demonstrate their understanding of the work of Rosa Parks in their written outlines and explanations of individual rights and community responsibility. Monitor student letters to assure that students use quality writing and express sincere feelings about the contributions of the people to whom they choose to write.

Students will work in interest groups within the classroom to identify a need in the school or community. They will make a plan to meet that need or provide some help. Refer to the Grades 3-5 Social Studies Unit entitled "Real Heroes" on the Learning to Give Web site (click on "Teaching Materials" in the left-hand frame of the Home Page, then Grade Level). The unit has several lessons which tie in nicely with this unit. One lesson has students attempting to fill a need, as suggested here. Another lesson has students identifying their heroes. In another lesson, students identify the attributes of a hero and contrast a hero with a celebrity.