A Couple of Misers

Grade Level:
9, 10, 11, 12
Keywords:
Act of Kindness
Couple of Misers (A)
Folktales
Generosity of Spirit
Indian Tale: A man and wife receive a visitor one rainy night. He praises them for welcoming him, and, little by little, teaches them how to share what they have. Miserliness is a habit that can be unlearned. 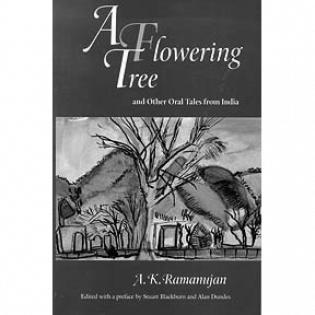 A miserly man married a miserly woman and they had a little son. They were such misers that they wouldn’t eat a betel nut; they would carefully suck on one and wipe it and put it away. They ate meals only because they needed to eat to keep alive. Still they complained and asked God why he had to make a stomach that they had to fill every day so many times.

They had a secret grain pit in the gods’ room, and their life’s ambition was to fill it with money by the time their little son grew up. The wife complained about the size of the cucumbers in their backyard: if only they could have been twice the size, the family could have dined on them for two more days. When her husband asked her to wear the one or two pieces of jewelry she had received at her wedding, she would say, “Are you crazy? If I wear them, I’ll wear them out. Who’s the loser then? You and me!” The husband would beam at his wife’s wisdom.

For years, no guest had ever entered their house for a drink of water or a morsel of food. One rainy season, the couple had shut all the doors when suddenly they heard someone banging on their door. The husband opened it and in came a holy man, grumbling, “What a terrible rain, what a terrible rain!” As soon as he came in, he shut the door behind him and praised them.
“You are such good people. I’d have caught cold in that rain and died. You took me in and saved my life.”

As he had come in like a wet dog, he wet the whole house with his drippings. The wife said, “That’s all very well. You’ve dripped water all over the house.”

The husband chimed in, “What shall we do if the house gets too damp and the walls crumble?”

The holy man was not worried. He said, “No such thing will happen. After all, a holy man like me is in this house. Why don’t you bring some cow dung and wipe the floor with all this water and make it clean and nice?”

The husband couldn’t bear this man’s intrusion. “We don’t yet know why Your Holiness is here,” he said, quite bluntly.

The man said, “What does a holy man do in his devotees’ house? It’s very hard these days to find real devotees like yourselves. You’re two in a thousand. Because of the likes of you, holy men survive in this world. Well, anyway it’s time for dinner. You could give me some dinner. Then you can spread a mat. I’ll lie on it and be gone in the morning. Anyway, good generous people like you are very rare. I’d rather get a glimpse of your sweet faces than go on a pilgrimage to Kashi.”

He didn’t seem to wait for any yes or no from them. The couple stood there with their mouths open. He didn’t notice them at all. He took off most of his wet clothes, wrung them out then and there, and hung them up to dry on the peg. He even took the dry shirt and dhoti of the host from the clothesline, put them on, and sat on a chair without a word of apology. He asked the bewildered host to sit down on the other chair, and asked the woman, “Will you finish cooking soon?” The husband sat down where he stood, his mouth still open. His wife went in to cook.

She had some leftover rice from the afternoon. She felt that wouldn’t be enough and made some more. She meant to serve the leftovers to the guest and the fresh hot rice to her husband. But she was too flustered to do so, and actually served her husband the leftovers and the guest the fresh rice. The holy man relished everything he ate and asked for more chutney and more ghee and more everything. She couldn’t help serving him whatever he asked for, to the great astonishment of her husband, who knew her very well. The guest talked ceaselessly through the meal and even afterwards as he relaxed in his chair and praised her cooking fulsomely.

“What a wonderful cook you are! It was like ambrosia. The spices, the proportions! Others may bring the whole spice bazaar to the kitchen but can’t cook one good curry.”

The wife ate the small scraps of food left over from this hearty meal, and came out of the kitchen, somewhat exhausted. The holy man addressed them both with great satisfaction.

“Look, as I said, we don’t get devotees like you every day. I’m very pleased with your hospitality. I’ll give you three wishes. Ask what you want.”

Now the faces of the miser and his wife blossomed. The man came and fell at the guest’s feet and said, “Sir, please, may whatever I touch turn into a heap of silver rupees.”

The holy man asked him first to let go of his legs, and when he had done so, said, “Done.”

The husband put his hands out and touched a couple of things around him, and they fell down in a clanging heap of rupees. His joy knew no bounds. He jumped up and down, touching everything he could see, turning things into heaps of rupees.

The wife now fell at the holy man’s feet, and thinking of the cucumbers in her backyard, said, “Swami, may whatever I touch grow as long as a yard.”

The holy man quickly said, “Let go of the legs first,” released himself, then said, “So be it.”

Whatever she touched grew at once as long as a yard. She went into the kitchen and touched the hot chilies. They became a yard long. She touched the cucumbers. They too grew a yard long. She touched whatever she fancied and made them all long.
Right at that moment, her little son was wakened by all this noise and began to cry. The mother ran in happily and touched his nose, saying, “My rajah!” And his nose at once grew long, a yard long. She screamed, horrified by her son’s bizarre looks. When the husband ran in, the child was howling, unable to bear the weight of his nose on his face. “O my poor son,” said the man and picked up the child, who at once crumbled into a heap of rupees. Then the husband and wife realized their blunder. They ran weeping to the holy man, who carefully kept his distance, and they begged of him, “Please, give us the third wish at once.”

“Tell me what you want.”

“We want everything to be as it was. Please see to it that our first two wishes are cancelled.”

The child began to play in the cradle as before. The chilies and cucumbers shrank back to their normal size. The heaps of rupees vanished, and things returned to their original shapes. When the man and the woman turned around, the holy man was nowhere to be seen. They said, “Look, that was God himself, come down to teach us a lesson.”

From that day on, they gave up their miserly ways and lived happily.

“A Couple of Misers”. Ramanujan, A. K. A Flowering Tree and Other Oral Tales from India. Berkeley London: University of California Press, ©1997.

Used with the permission of University of California Press.

Related Resources
Luck of a Child
Generosity of Spirit in World Folktales and Myths
A Flowering Tree
https://www.learningtogive.org/sites/default/files/link_bg1.jpg