Grade Level:
4, 5, 6, 7, 8, 9, 10, 11, 12
Keywords:
Hispanics
History
Inclusion
Racism
Segregation
Social Justice
by Duncan Tonatiuh (toh-nah-tee-YOU) - A guide for parents, teachers, and group leaders to accompany the reading of this picture book. The guide below provides before, during, and after-reading discussion questions. Choose from activities and discussion questions to build children's understanding of the history of segregation and perseverance against injustice. 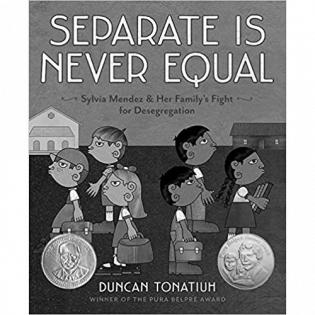 Stylistically illustrated, this book documents the first fight for racial integration of public schools in the United States. Follow Sylvia Mendez and her family as they relentlessly work for school desegregation in California in the 1940’s.

Ask: Consider the title of this book, Separate Is Never Equal. What do you think that phrase means? What do you already know about the history of segregation of children of different backgrounds in schools?

Connect: In the United States today, all children are allowed to go to school together, regardless of race, but that wasn’t always the case. Read the true story of Sylvia Mendez to find out more about segregation.

Ask:  What does “separate but equal” mean? Use the glossary on p. 38 to define it. Why do you think so many people from different backgrounds from all over Orange County, and later from all around the United States, got involved in the Menedez case? Sylvia's mother said, "When you fight for justice, others will follow."

Connect: “Your children have to go to the Mexican school” was a statement Mr. Mendez heard over and over, but no one gave him a satisfactory answer as to why. It would have been simpler for Mr. Mendez to back down and think that’s just the way it is.  He decided it wasn’t right so he sacrificed and worked hard to do something about it. Talk about times you’ve noticed when things didn’t seem just or fair.

Ask: You don’t have to be an adult or go to trial to make a difference. How do you see yourself reflected in Sylvia’s story? Your voice is valuable. How might you use it to make meaningful contributions to your community?

Show: Duncan Tonatiuh did a lot of research to create this story. Look at p. 37 - 39 to see photographs, a glossary of terms, and a bibliography that all add background and credibility to his work.

Connect: Sylvia’s family spent years sacrificing their time and money on this effort, not only for their own family but for all children in their community and ultimately the state of California. What issues do you think you and your family would be willing to work that hard for?