This lesson focuses on two young Jewish survivors of Auschwitz-Birkenau, the Nazi death camp.  As they return to their home town and the concentration camp, they each tell their story and explain why they were willing to return to such an emotionally devastating place. Their story is replete with examples of heroism and concern for others in the face of unspeakable sorrow. 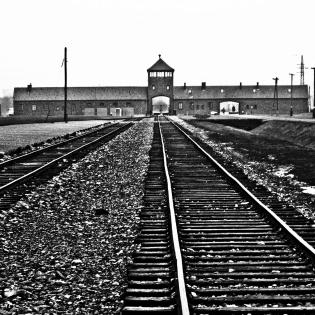 Prior to teaching this lesson, because of the sensitive nature of the topic and some of the images contained in this film, teachers are encouraged to consider sending the Letter to Families/Guardians (handout below) home with the students, giving the adult family members an opportunity to preview the film and discuss it with their child.

Because of the sensitive nature of the topic and some of the images contained in this film, adult family members are urged to preview the film, or view and discuss it with their child. A sample letter for families is included below, Letter to Families/Guardians.

She also asks us to “pray that this does not happen to any children any more in this world.”

Reflect on Frieda’s hope and the experiences the two survivors experienced in their early years.

Evaluate the importance of Frieda and Tova’s story with those who view this film. What attitudes and behaviors of others might be influenced through the sharing of their story?

Explore the injustices in the world today. There are individuals and populations who are misunderstood and mistreated (neglected, abused or bullied) in our country and around the world. Students investigate, plan, and take action to advocate for fair treatment.

Overview of "Surviving Auschwitz: Children of the Shoah*"