Grade Level:
2, 3, 4, 5, 6, 7, 8
Keywords:
Common Good
Conflict Resolution
Diversity
Factions
Families Are Different
Respect
Tolerance
War
by Dr. Seuss - A literature guide for parents, teachers, and group leaders to accompany the reading of this picture book. The guide below provides before, during, and after-reading discussion questions. Choose from activities and discussion questions to build children's understanding of generosity, community, and service to others. Spanish Version Attached. 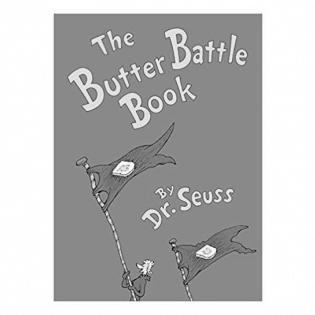 This cautionary tale about conflict may be read on different levels for different ages. The factions formed over how to butter bread serve as a reminder that we can find common ground if we look for it. We can solve problems and respect differences in others. These are skills we need from childhood to adulthood. This book, through humor and exaggeration, serves as a springboard for a discussion on respecting differences in others. Everyone finishes this book understanding the absurdity of fierce fighting over something as silly as which way they buttered their bread. Although written during the time of the nuclear arms race, the message of peace is universal and timeless.

ASK: Would you like to eat your bread with the butter on the bottom? If not, would it bother you if someone else did it? Would you start a fight with someone who did it?

SHOW: Look at the picture of the wall with the poster on it that says, “Yooks are not Zooks. Keep your butter side up!” This wall was built to separate people who butter their bread differently.

CONNECT: People are different in many ways, but they are also the same in many ways. Have you ever thought someone was strange because he or she was different? Is it okay for people to be VERY different from you? Think of someone in your community or school that you think is “weird.” Is it possible that this weird person is just different and that difference may make him or her interesting? Talk seriously about what would happen if you tried to get to know this person (think pros and cons).

ASK: Why do the Yooks and Zooks keep getting bigger and stronger weapons?

SHOW: Look at the picture with the “butter-up band.” Talk about what the cheerleaders of the Zooks might say or do on their side of the wall.

CONNECT: In disagreements that you know of, have you ever seen someone change their arguments or weapons to seem stronger? What happened then?

ASK: Can anyone win this battle? How? or Why not?

CONNECT: Think about a conflict that you have been involved in (or have read about). What can you do to get along sooner (or at least not get to the point where no one can win)? Is it possible to have a fight in which both sides win? How can you get into a “win-win situation?”