Grade Level:
9, 10, 11, 12
Keywords:
Asia
Generosity of Spirit
Korea
Sharing
Stories
Story-Bag (The)
Korean Tale: A young boy greedily demands stories from everyone he meets, stuffing them into a “story-bag” and never sharing them. When he grows up and is about to be married, a servant overhears the stories plotting to take revenge. Stories are gifts that are meant to be shared . 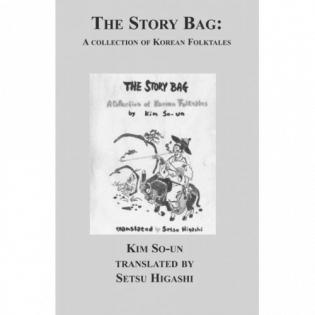 There once lived a very rich family. They had only one child, a boy, who loved to have stories told to him. Whenever he met a new person, he would say: “Tell me a different story.”

And, each time, he would store away the story he heard in a small bag he carried at his belt. So many stories did he hear that soon the bag was packed tight and he had to push hard to get each new story in. Then, to make sure that none of the stories escaped, he kept the bag tied tightly at the mouth.

The boy eventually grew into a handsome young man. The time came for him to take a wife. A bride was chosen for him, and the whole house was preparing to greet the young master’s new wife. Everything was in an uproar.

Now, there happened to be in this rich home a faithful old servant who had been with the family ever since the time when the story-loving boy was still very young. As the household made ready for the young master’s wedding, this servant was tending a fire on the kitchen hearth. Suddenly his ears caught faint whispering sounds coming from somewhere. He listened carefully and soon discovered that the voices were coming from a bag hanging on the wall. It was the bag of stories which the young master had kept in his childhood. Now it hung forgotten on an old nail on the kitchen wall. The old servant listened carefully.

“Listen, everyone,” said a voice. “the boy’s wedding is to take place tomorrow. He has kept us this long while stuffed in this bag, packed so closely and uncomfortably together. We have suffered for a long time. We must make him pay for this some way or another.”

“Yes,” said another voice, “I have been thinking the same thing. Tomorrow the young man will leave by horse to bring home his bride. I shall change into bright red berries, ripening by the roadside. There I shall wait for him. I shall be poisonous but shall look so beautiful that he will want to eat me. If he does, I shall kill him.”

“And, if he doesn’t die after eating the berries,” piped up a third voice, “I shall become a clear, bubbling spring by the roadside. I shall have a beautiful gourd dipper floating in me. When he sees me he will feel thirsty and will drink me. When I get inside of him, I shall make him suffer terribly.”

A fourth voice then broke in: “If you fail, then I shall become an iron skewer, heated red-hot, and I shall hide in the bag of chaff that will be placed by his horse for him to dismount on when he reaches his bride’s home. And when he steps on me, I shall burn his feet badly.” Because, you see, according to the custom of the land in those days, a bag of chaff was always placed by the bridegroom’s horse so that he would not have to step directly on the ground.

Then a fifth voice whispered: “If that fails too, I shall become those poisonous string-snakes, thin as threads. Then I shall hide in the bridal chamber. When the bride and the bridegroom have gone to sleep, I shall come out and bite them.”

The servant was filled with alarm by what he heard. “This is terrible,” he told himself. “I must not let any harm come to the young master. When he leaves the house tomorrow, I must take the bridle and lead the horse myself.”

Early next morning, the final preparations were completed, and the wedding procession was ready to set forth. The groom, dressed in his best, came out of the house and mounted his horse. Suddenly the faithful servant came running out and grabbed the horse’s bridle. He then asked to be allowed to lead the horse.

The old master of the house said: “You have other work to do. You had better stay behind.”

“But I must lead the horse today,” the servant said. “I don’t care what happens, but I insist that I take the bridle.”

He refused to listen to anyone and, finally, the master, surprised a the old man’s obstinacy, allowed him to led the horse to the bride’s home.

As the procession wound along its way, the bridegroom came to an open field. There by the roadside many bright berries were growing. They looked temptingly delicious.

“Wait!” the bridegroom called out. “Stop the horse and pick me some of those berries.”

However, the servant would not stop. In fact, he purposely made the horse hurry on and said: “Oh, those berries. You can find them anywhere. Just be a little patient. I shall pick some for you later.” And he gave the horse a good crack of the whip.”

After a while, they came to a bubbling spring. Its clear waters seemed cool and tempting. There was even a small gourd dipper floating on the water, as if to invite the passerby to have a drink.

“Bring me some of that water,” the bridegroom said to the servant. “I have been thirsty for some time.”

But, again, the servant prodded the horse and hurried by. “Once we get into the shade of those trees, your thirst will soon disappear,” he said, and he gave the horse another crack of the whip, a blow much harder than the first.

The bridegroom grumbled and mumbled from atop his horse. He was in a bad mood, but the servant took no notice. He only made the horse hurry the faster.

Soon they reached the bride’s home. There, already gathered in the yard, was a large crowd of people. The servant led the horse into the compound and stopped it beside the waiting bag of chaff. As the bridegroom put down his foot to dismount, the servant pretended to stumble and shoved the bridegroom to keep him from stepping on the bag.

The bridegroom fell to the straw mats laid out on the ground. He blushed in shame at his clumsy fall. However, he could not scold his servant in front of all the people. So he kept silent and entered the bride’s home.

There, the wedding ceremony was held without untoward incident, and the newly-married couple returned to the groom’s home.

Soon night fell, and the bride and bridegroom retired to their room. The faithful servant armed himself with a sword and hid himself under the veranda outside the bridal chamber.

As soon as the bride and bridegroom turned out the lights and went to bed, the servant opened the door of the room and leapt inside.

The newly-wed couple was startled beyond description. “Who’s there?” they both shouted, jumping out of bed.

“Young master,” the servant said, “I shall explain later. Right now, just hurry and get out of the way.”

The servant kicked the bedding aside and lifted the mattress. A terrible sight greeted their eyes. There hundreds of string-snakes coiled and writhed in a single ball. The servant slashed at the snakes with the sword in his hand. As he cut some into pieces, they opened their red mouths and darted their black forked tongues at him. Other snakes slithered here and there, trying to escape the servant’s flashing sword. The servant whirled here and there like a madman and finally killed every one of the snakes in the room.

Then he let out a great sigh of relief and began: “Young master, this is the story…” And the old servant recounted the whispers that he had heard coming form the old bag on the kitchen wall.

That is why when stories are heard they must never be stored away to become mean and spiteful, but must always be shared with other people. In this way, they are passed from one person to another so that as many people as possible can enjoy them.