Grade Level:
K, 1, 2, 3, 4, 5
Keywords:
Animal
Caring
Environment
Nature
by Jim Arnosky - A literature guide for parents, teachers, and group leaders to accompany the reading of this picture book. The guide below provides before, during, and after-reading discussion questions. Choose from activities and discussion questions to build children's understanding of generosity, community, and service to others. 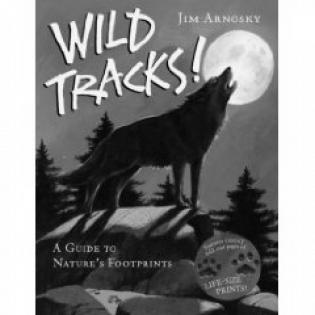 What do you leave behind when you walk through the woods? Hopefully only tracks of your footprints. In this book, Jim Arnosky guides readers to learn the language of animal tracks. We learn about the behavior and personalities of a variety of animals simply by studying their tracks. Through comparison of shape, pattern, and size, we admire the beauty and complexity of nature. This nonfiction text inspires and feeds the young naturalist.

ASK: What animal tracks have you seen in the woods? How big were they? Did you like seeing them?

SHOW: Look at the cover. We probably won’t get to see a wolf or other wild animals in the woods, but what evidence do you think we might see or hear of them?

CONNECT: Have you ever heard a wolf howl? What does it sound like?

SHOW: Look at the deer tracks (page 9). Read about the dewclaws and find the tracks that show dewclaws. Compare the running tracks to the walking tracks.

ASK: What do you think animals would think if they knew people were studying their tracks?

SHOW: Look at the artist’s technique to show depth and texture. Talk about how color and shading make some parts of the track look deeper than others.

CONNECT: Find the tracks in the book that are familiar as something you might find in your area. Talk about that animal’s habits—what time of day are they out, where do they live, what do they eat, how they act around humans, etc.