Grade Level:
PreK, K, 1, 2, 3, 4, 5, 6, 7, 8
Keywords:
Civil Rights
Common Good
Heritage
Hispanics
by Kathleen Krull - A guide for parents, teachers, and group leaders to accompany the reading of this picture book. The guide below provides before, during, and after-reading discussion questions. Choose from activities and discussion questions to understand the reasons people migrate and how we can combine our resources and talents to make change. 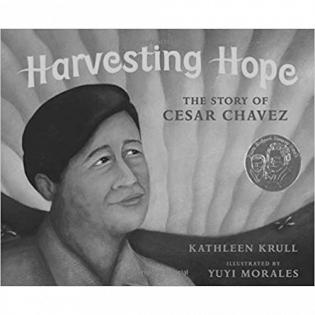 This books tells the real-life journey of Cesar Chavez, who moved with his childhood family of Mexican heritage from farm to farm as migrants, trying to earn enough money for food and housing. When he grew up, Chavez spoke up for fairness in pay and housing for farm workers, and he became a strong leader, famous for peaceful advocacy and words heard across the world. The story of Cesar Chavez demonstrates the role of empathy and an individual's power to use their voice to take social action and organize a community around a common goal.

Ask: What do you know about how our food gets from the farm field to the grocery store? Describe how it takes a community to get that done.

Show: Look at the picture of Cesar Chavez on the cover. Say, this Hispanic man is famous for using his words and mind to help many poor people earn a fair wage. Why do you think he would work so hard to help other people get paid a fair wage?

Connect: In the 1930s, many families in U.S. lost their farms, and they moved to California where there were farm jobs. There were no laws about how much to pay workers, and some made as little as 40 cents a day. The farm workers picking food were sometimes hungry themselves. Describe a situation where someone is working hard but not getting what they need.

Ask: What are some of the things in a house and things we do in a house that turn a house into a home? How do you think Cesar's happy childhood impacted his work to help others?

Show: Compare the pictures of homes on the first few pages, including the happy family in the adobe home and the rough farm shelter. What do you think it was like to move as a family from the adobe house into the other?

Connect: What is empathy? Describe how empathy caused Cesar Chavez to help people who worked in bad conditions for very little money.

Ask: What do Cesar's mother's words mean to "use minds and mouths" to work out conflict? In what situations can you use your mind and mouth to solve a problem?

Show: Look at the pictures of crowds celebrating and joining the effort. Cesar reminded everyone of what the victory was: "Some of the wealthiest people in the country had been forced to recognize some of the poorest as human beings." In what ways were farm workers treated as if they were not human beings? Discuss the idea that it is racist to act as if some people have more value than others.

Reflect: What does the title Harvesting Hope mean to you? Why is it a good title for this book?